The concept of ideal beauty as perpetuated and promoted by our society is full of infuriating contradictions from “natural beauty” as created via artfully applied make-up, plastic surgery, and masterful photo manipulation to models and actresses who are praised for the “healthy” lifestyle that grants them their svelte physique–a lifestyle that often involves smoking, starvation, crash diets, and dangerous “supplements.” But worst among the contradictions is the closely held belief I see reinforced time and time again with heart-breaking, spirit-crushing regularity: the higher the number on your scale, the lower your value to society.  In other words, the more you weigh, the less you are worth.

Plenty of people might clamor to say, “No! That’s not true at all!” But even if the naysayers have never thought this way about themselves or others (and I’m pessimistic about that possibility), I would bet they’ve witnessed this mindset in action. Why does that number on the scale have so much power? Why do so many of us let that number control our lives?

Personally, I know this contradiction runs even deeper. My own thoughts about myself as compared to the way I view others is a study in contradiction. I have never looked at another woman and thought her size made her less of a person. But any time – every time – I look in the mirror the rude comments, negative thoughts, and insults fill my brain in an endless litany of shame and disgust. Sometimes, I avoid the mirror altogether. My soul just isn’t up for the beating that day.

Which brings me back to the why. Why do I do this to myself? Why can’t I stop? I have a husband who tells me every single day that he loves me – that he finds me beautiful, attractive, and yes, even sexy. But all I can ever think is that someday he’s going to look at me and see what I see…someday he’s going to finally realize I’m revolting. I try and hide these thoughts and feelings from him but occasionally they surface, and I become even more ashamed – not only do I feel bad about my body, but I feel bad about the fact that I feel bad.

I love the recent trend of women fighting back, of females taking back their right to feel good about themselves and not let the scale – or society – dictate their worth. Moms who go to the beach in their swimsuit and spend the day laughing with their kids, not obsessing about the dimples on their thighs. I admire them, but I can’t seem to be one of them. Instead, it becomes one more thing I feel bad about – one more layer added to my guilt cake (and yes, I see the irony of using a cake metaphor in a discussion about weight). I go to the pool with my daughters and feel double the insecurity: I envy the skinny moms confidently displaying their taut tummies and I envy the smiling chubby moms refusing to hide their less taut ones. I feel like a failure on both sides. 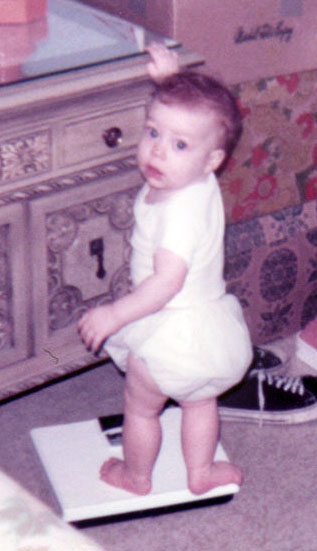 Why? Despite the picture above, the scale didn’t take control of my self-confidence until years later. I can remember it clearly, it was sixth grade…f*cking sixth grade. Gym class. We all had to line up in front of a scale to – you guessed it – get weighed…in front of everyone. I remember the number on that scale when it was my turn. I remember the name and face of the boy who commented on it later, snickering. His snickering stabbed me, his mocking smile made my insides curdle. Looking back, I realize if I hadn’t let his comments affect me so deeply, if I had ignored him, then what happened next may have never happened at all. I wasn’t the heaviest kid in my class, and I definitely  was not obese. But tweens are vampires who feed on the insecurities of others, and I gave my fellow students a feast that day. Soon others joined him, adding their giggles and comments and insults. It wrecked me…in ways I am still trying to deal with. I own that. I own that I let this affect me. But it sure would have been nice if the school hadn’t made this opportunity for public humiliation so conveniently available.

The pain of that day came rushing back when I read the recent HuffPost article about a girl who refused to let her school weigh her. Sure, one may argue that we should all be more confident and not let others’ opinions of us affect our opinions of ourselves. And while that’s an optimistic goal, it’s hardly realistic. If students were to all take an IQ test, would that number be posted publicly for all the class to see? No. That kind of information is considered private and zealously guarded by  administration…why not a student’s weight?

It goes back to that contradiction. No one ever argues that individual student IQs should be public knowledge. No one ever stands up and says it is acceptable to ridicule someone’s intelligence…but weight? As evidenced by some of the comments on the article mentioned above, and on the Facebook post where I first saw this article linked, there are those who feel it is the school’s right – even their duty –  to weigh students. And if other kids see that number and mock a student for it? Well then maybe it will force a chubby kid to lose some damn weight, right? Right?

The woman who looks in the mirror and still sees that embarrassed and ashamed 6th grade girl says NO.

I hope I figure out how to work through my issues. I’m trying. For the sake of my own daughters (one who is currently in sixth grade herself), I hope not just to preach body acceptance but to one day truly believe it about myself too…after all, as long as this contradiction lives inside me, inside any of us, how can we hope to correct the contradictions of our society?

It was very difficult to hit “publish” on this post. Talking about my weight/mental issues makes me squirmy and scared – the conversation is one that usually takes place only in the privacy of my own mind but I decided that letting those thoughts out of my head might be the first step in keeping them out.

I treated myself.
A lot of old memories are popping up on my feed this week, and it's nice to be reminded of some cool things that have happened. Like the fact I got to sign my name on the wall at @strandbookstore after being part of an author event there. 💕💕💕
With the 2nd book in the Sunshine Vicram series dropping this week, Grogu is a little behind, but plans to catch up asap with today's #GroguReadsRomance
More #NKOTBtbt summertime fun 🌞
Summing up the Lush lifestyle 💖💖💖
Grogu is giving historical a spin today

It was such a treat to open my inbox last Friday and see TOO GOOD TO BE REAL featured in this July round-up of favorite books from @barnesandnoble
The latest episode of #KissListConfessions features @aj_pine who shares the story of her first kiss (described as dark, wet, & awkward) and other kissing confessions!
This week's episode of #MadAboutMeetCutes features @authorcarrienichols
Happy International Friendship Day!!!
This week's #SummerOfSunfire takes us back to the American Revolution with SABRINA, number 17 in the series.
Do you sometimes find yourself skipping to the "good stuff" in a romance? Have you ever bookmarked the "naughty bits" for reasons? Then STEAM SCENES is the podcast for you!